Liu is initially the navigator of GAUS Unit 1 whose pilot is Tom Borden. With the availability of the GAUS 3, she became a solo pilot.

Shenmei is a fairly tall woman with a athletic, slim build. She has long pink hair reaching down to a little above her knees, pale skin and purple eyes. She is shown wearing both the standard GAUS pilot suit and her green and black shorts and shirt with a black cap and shoes.

She is also shown wearing a red and white coat in Episode 22, and a one piece yellow suit and trainers in Episode 23.

Shenmei is very calm and restrained, thinking through her actions carefully in battle and acting as a counterweight to Tom Borden's brash and easy to anger personality. He appears naturally calm but is still happy to mess around a little, shown when she joins in to make a film with the other cast members during the Efidorg invasion.

Shenmei initially was the Navigator of the GAUS Unit 1 that was piloted by Tom Borden. They appear to both get along, and he doesn't get properly angry with her even when she drop kicks him in Episode 23.

-Shenmei is the only one of the pilots not being put through training during the summer, implying either she or Tom doesn't consider her in need of it. (She does turn up to supervise, however).

Shenmei in GAUS1 with Tom 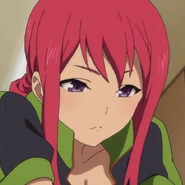 Retrieved from "https://kuromukuro.fandom.com/wiki/Shenmei_Liu?oldid=1994"
Community content is available under CC-BY-SA unless otherwise noted.